Over the last year, a committee of parents, students and staff have been working with members of the Yakama Nation and a professor from Heritage University regarding our mascot name (Warriors) and our Native American imagery (HS Crest, HS Gym murals, District Logo, Athletic uniforms, and totem pole). The new state law HB 1356 requires us  to work with our local tribes (Yakama Nation) to help evaluate our imagery depicting Native Americans, and our mascot, to make sure it is representative (and not offensive) of our local tribes. The law states we are to work collaboratively on gaining their approval that will honor and represent Native American culture of this region and avoid any inappropriate use.

We have learned so much from this collaborative process with our committee and tribal representatives. The goal of the law is to ensure that we avoid racially derogatory or discriminatory school mascots, logos, or team names in public schools.

Specifically, we are now aware that some of our images and (historical) fan behavior have been, or may have the potential to be, offensive to Native American communities. The Yakama Nation has informed us that our current images do not represent our local tribes but tribes of other regions of the country or the State.

We understand there are many proud community traditions surrounding the Warrior name and our Native themes that affect not only current students but many generations of past families as well. In honoring our past along with our indigenous neighbors, we are working towards new concepts and images of what it means to be a warrior in our community. Our goal as a committee is to seek approval for the “Warrior” name to remain, and to see what current imagery we can adjust to better represent our Yakama Nation

We look forward to working with our community and revitalizing the Warrior mascot into something we can use as an icon to represent our unique community into something we can all be proud of! Undoubtedly updating our logo and imagery will be a major shift for our district. However, it is reassuring to observe other districts, teams (including professional sports teams) successfully navigate a similar process in order to  honor their indigenous neighbors.

Your support is welcome to help us as we develop/update images and logos that respect and honor the Cle Elum-Roslyn Warriors. As the committee nears our deadline of January 1st, 2023, we will be sharing designs with the community  and asking for community input. The Cle Elum-Roslyn School Board will then take this input, and make a final decision. In the meantime, if you would like to follow the work of the committee, please continue to visit this webpage. 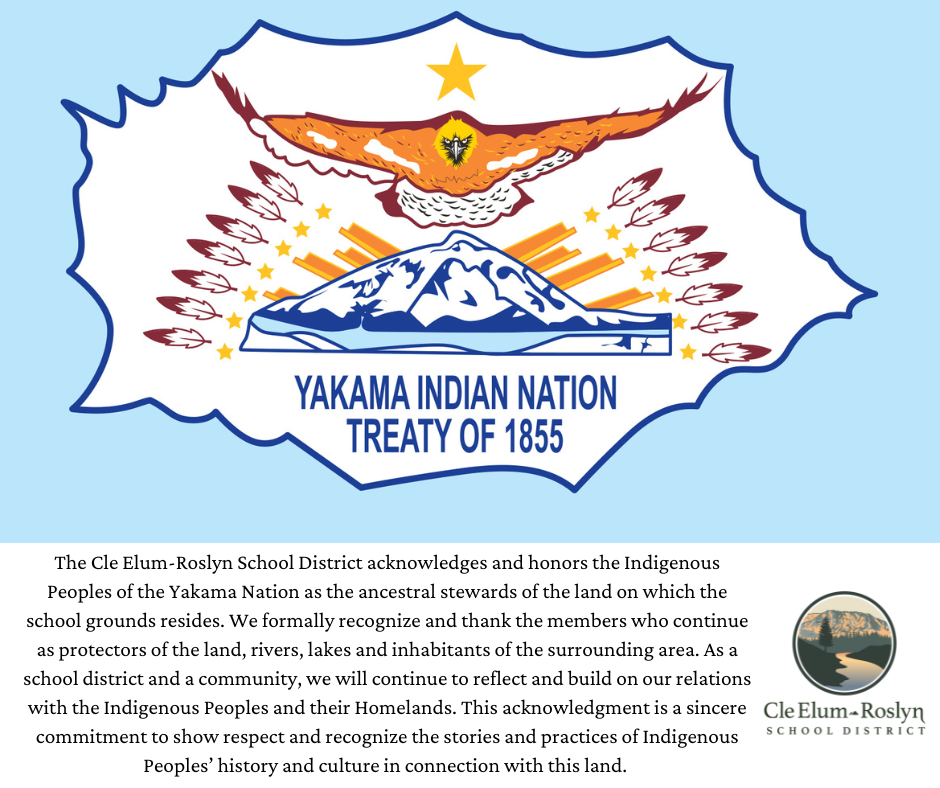 Update From The Warrior Mascot Committee

On November 29, 2022, eleven members of the Yakama Warriors Association made the trip from Yakima to Cle Elum- Roslyn High School to raise the Yakama Nation flag. This monumental event signified the partnership between the Cle Elum-Roslyn School District and the Yakama Nation, as the two groups continue to work together to learn from each other and support the community’s history. 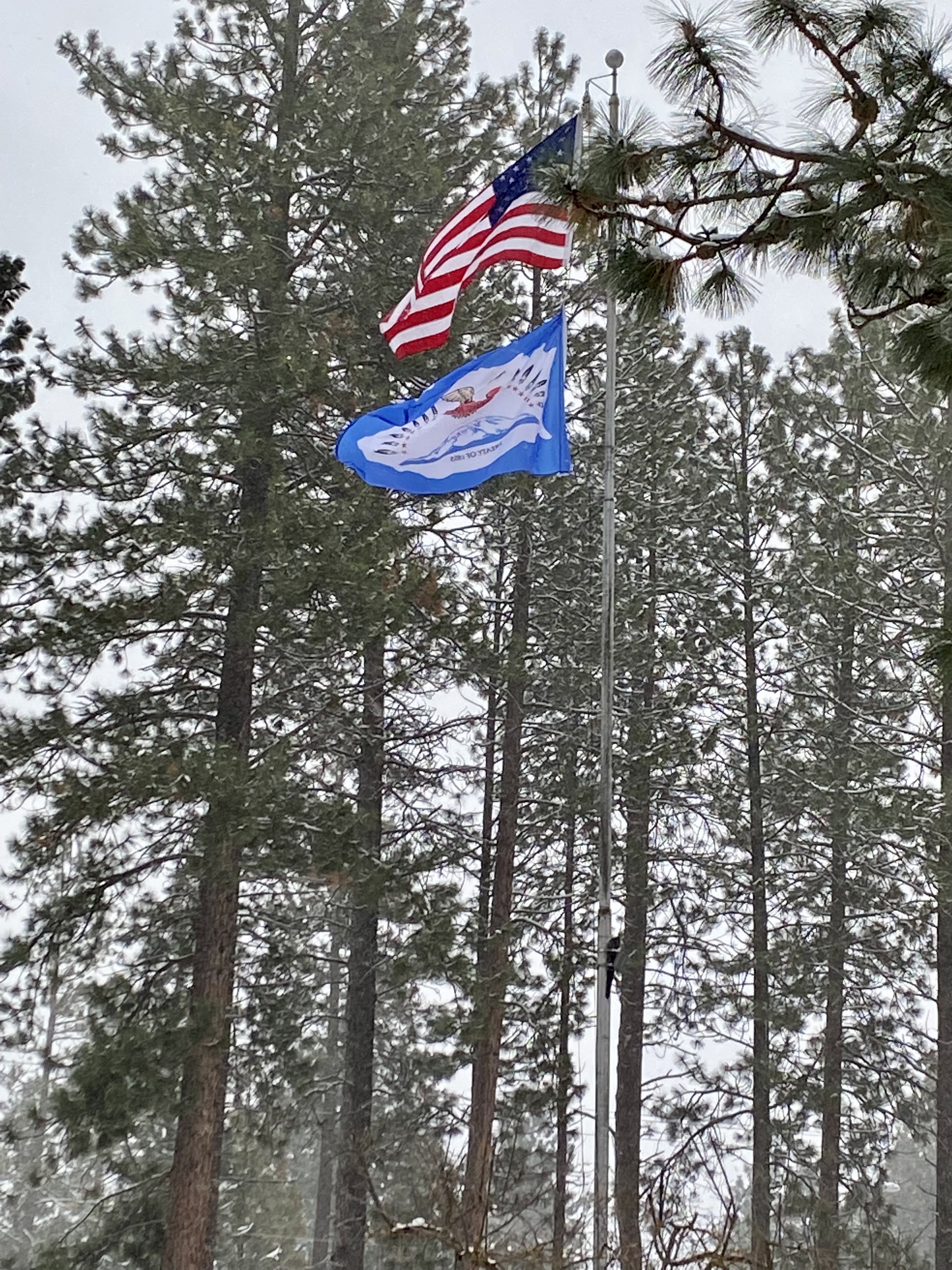 Update From The Warrior Mascot Committee

On November 9, 2022 the Warrior Mascot Committee met to discuss the results of the Warrior logo survey. The logo survey had 744 people respond and the top selection was the Cle Elum-Roslyn Warriors arrowhead with the mountains reflecting in the lake.

On Monday, November 21, 2022, the Yakama Nation Educational Committee requested the proposed Warrior logo and a summary of the process for its selection. On November 23, 2022 the proposed Warrior Logo and summary were submitted by Sarah Day and Sarah Houseberg. At this point, we are waiting for a response from the Educational Committee to determine if we will need to attend the next Tribal Council meeting.

As submitted for publication in the Northern Kittitas County Tribune on August 25, 2022

The Cle Elum-Roslyn Mascot Committee was invited to attend the Yakama Nation Tribal Council Meeting on August 4th.  The committee members presented an update on the work and progress the committee has made since last December.  The Tribal Council members asked questions about the change of Swiftwater Learning Center’s logo and spoke about their own experiences attending athletic events in our community.  The meeting concluded with the Tribal Council asking the Education Committee to draft a resolution.  The resolution will be voted on at the Tribal Council meeting to be held in early September.  The resolution will include the request to approve the use of the Warrior name, acceptance of the proposed Land Acknowledgement, ability to fly a Yakama Nation flag on campus, and the ability for the community and the school to continue to work together to create an updated CERHS logo.  The committee’s primary goal was to maintain the use of the Warrior name. We have come to an agreement as a committee, in partnership with the tribe, that any profile of a Native American will be discontinued. The resolution  will also include a timeline for any and all existing artwork and images of profiles to be honored and retired by summer of 2023.  The school district will be seeking community input on how best to retire the images/artwork.

Overall the partnership with the tribe has been very positive as the committee works to navigate HB 1356. The new state law HB 1356 requires us  to work with our local tribes (Yakama Nation) to help evaluate our imagery depicting Native Americans, and our mascot, to make sure it is representative (and not offensive) of our local tribes. The law states we are to work collaboratively on gaining their approval that will honor and represent Native American culture of this region and avoid any inappropriate use.

We have learned so much from this collaborative process with our committee and tribal representatives. The goal of the law is to ensure that we avoid racially derogatory or discriminatory school mascots, logos, or team names in public schools. Members of the Warrior Mascot committee and the Yakama Nation Education are also working to improve the Since Time Immemorial curriculum to include more information about our area and the Yakama Nation.

Your support is welcome to help us as we develop/update images and logos that respect and honor the Cle Elum-Roslyn Warriors.  In the coming weeks the committee will be asking for the community to provide ideas for a new logo. Cle Elum local and graphic designer, CJ Strom will be working to help create some of the artwork for the community, tribe and board to review. The Cle Elum-Roslyn School Board will then take this input, and make a final decision. In the meantime, if you would like to follow the work of the committee, please visit the Warrior Mascot webpage at: https://www.cersd.org/o/cerhs/page/warrior-mascot-committee-work 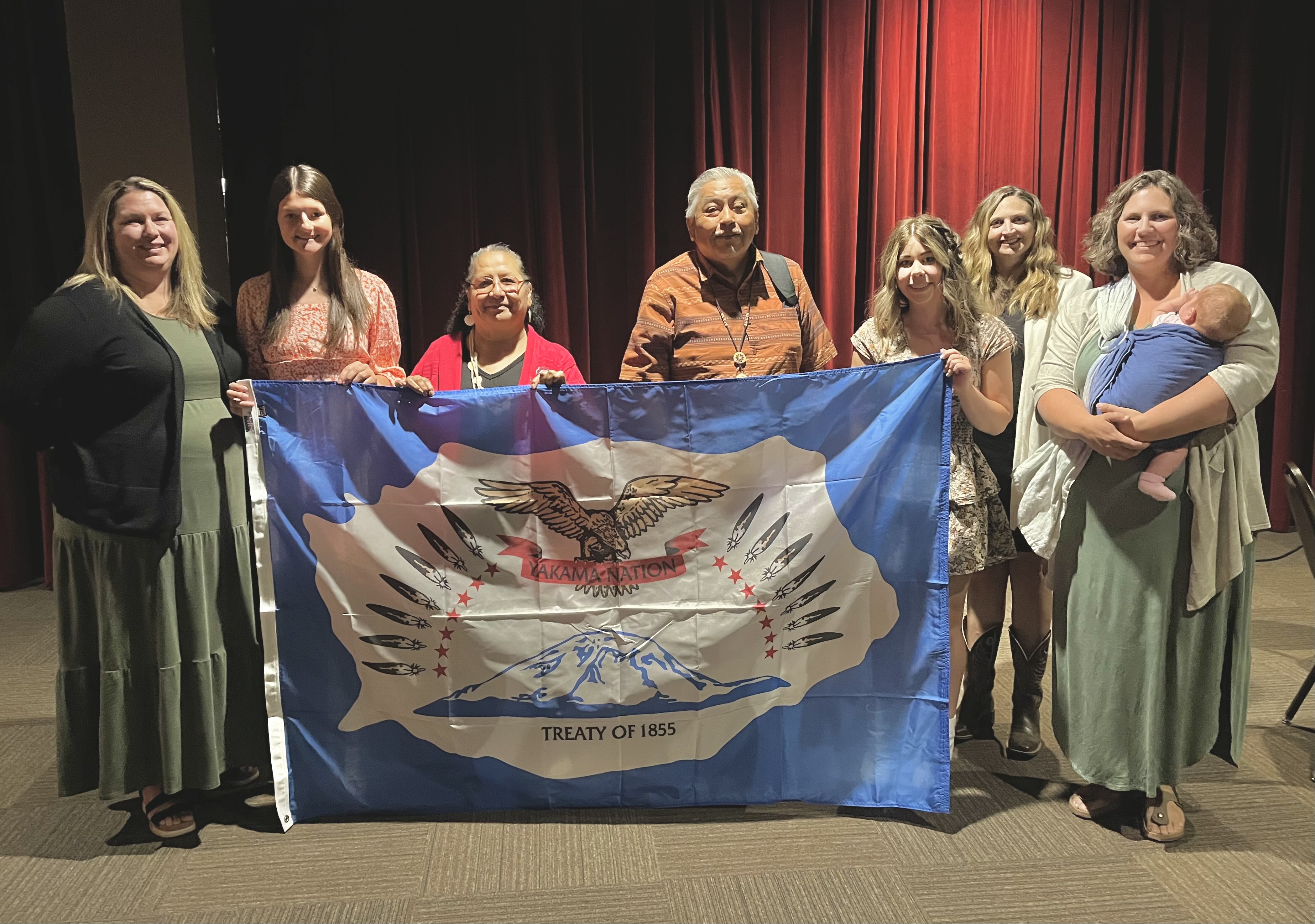 Yakama Nation Approves Resolution for CERHS to Continue as Warriors

As submitted for publication in the Northern Kittitas County Tribune on September 15, 2022

On Thursday, September 8th, the Yakama Nation Tribal Council approved a formal resolution that will allow Cle Elum-Roslyn High School to continue to be known as the Warriors. A small group of members from the Warrior Mascot Committee traveled to Yakima to attend the Tribal Council meeting.  Principal Sarah Houseberg gave an opening statement with a brief update that Charles (CJ) Strom has agreed to assist the committee in refreshing the HS logo with input from our students.  She then introduced two students, Sadie Melhorn and Rachael Bator to the Council.  Both students shared their perspective as students and members of the committee.  Rachael Bator, a fourth generation Warrior, was the first student to speak and shared, “my eyes have been opened to issues I was not aware of before..” Rachael continued to say how learning that the Yakama Nation believes the Warrior is a protector was powerful. She then told the Tribal Council about the way our community protects and helps families who are experiencing difficult times.

Sadie Melhorn also spoke to members of the Tribal Council and shared a different but equally powerful message as a perspective of a student who moved from Yakima to Cle Elum a few years ago.  Sadie shared that she (and other students) see the Warrior as strong and brave but that being part of the committee she has developed a deeper understanding about the Yakama.  She said that learning about the Yakama has inspired her to learn more about her own heritage from the Wyandotte tribe in Oklahoma.

The student’s speeches resonated with members of Tribal Council who thanked the students for sharing their stories.

Yakama Nation Tribal Council member Esther Moses Hyipeer said that she is “grateful Cle Elum has stepped up and come forward to understand and is taking every effort to work on the logo so when Native American students come in the school they are not meant to feel shamed or belittled but proud.”  She encouraged the students to speak to their peers and share their stories with others.

After the resolution was accepted, the students were asked to come to the front of the room where Chairman Sahluskin presented a Yakama Nation flag to the students.  The resolution that is now in place allows for the Yakama Flag to be flown on campus, the totem pole (that is an owl habitat) to remain, the continued use of the name (maintained with honor) Warriors, additional time to recognize and retire some imagery in  the building and the partnership to continue to work with the Yakama Nation Education Council.

In closing remarks to the Tribal Council, Principal Houseberg shared that she will be working with the students of Cle Elum-Roslyn High School so that they too understand HB 1356, the process the committee went through and will solicit their ideas on a new refreshed logo for CJ Strom to design. She concluded with, “thank you for giving us the opportunity for our youth to teach our elders and our community (about the Warrior).”

After the meeting, Arlen Washines shared, “Rachael and Sadie did awesome today and was icing on the cake to all the excellent work the committee has done thus far. A big step and I know the school and community will embrace the future with good feelings and commitment to ensuring the legacy of your hard work continues well into the future.”

A committee of parents, students, staff and members of the tribe have spent a year working towards this moment.  The committee was very aware of the community’s attachment and love for being the home of the Warriors. Trying to balance that with the law outlined by HB 1356 was a delicate and complex task. Ultimately the goal of the group was to maintain the name “Warriors” and work to create a logo that we can all feel proud of.

The committee will now shift their work to establishing a process to solicit feedback and input from students and the community regarding the refreshed logo. When the committee has determined that process, they will be putting out information in the NKC Tribune, in flyers posted in town, on the website and through social media.

In the meantime, if you would like to know more about this project, please visit the website to learn more: https://www.cersd.org/o/cerhs/page/warrior-mascot-committee-work 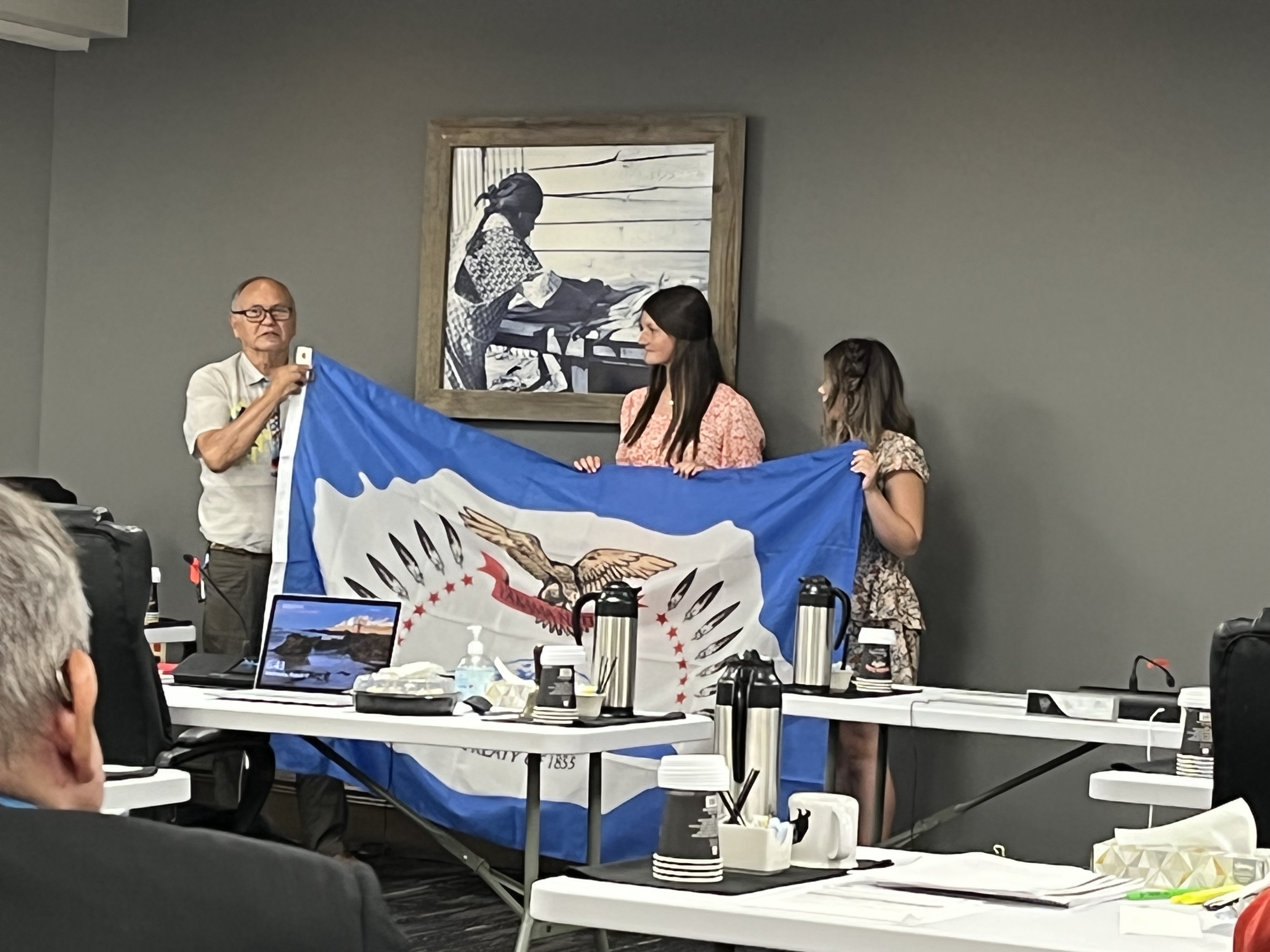